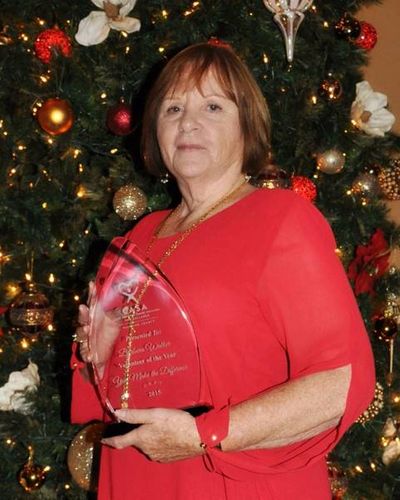 CASA of Paulding County, Inc., Throw a Holiday Gala Extravaganza for their volunteers and present Barbara Walker with the “Volunteer of the Year” award for her advocacy work.

CASA Paulding Board of Directors and Staff hosted their yearly award ceremony, to recognize CASA volunteers that advocated for more than 200 abused and neglected children of Paulding County in the year 2015 alone.

CASA Volunteers, family and friends gathered at the prestigious Brookstone Country Club to honor the CASA volunteer’s achievements and presence a beautiful award ceremony in which Barabara Walker received the Volunteer of the year award.

Barbara has been a volunteer with the CASA program since March 2004. In her time of service with CASA, she has advocated for 17 children and currently serves 3 children. The majority of Barbara’s advocacy has been for children with severe sexual, emotional, substance abuse and mental health issues. As a CASA Volunteer, Barbara helps to strengthen the community by helping to make better the lives of abused and neglected children who are caught up in the juvenile court system through no fault of their own. When asked, what do you get out of helping? Barbara stated, “Children need a voice when abused. I feel I can help any child, and regardless of how significant the problem(s) may be, I’ve made a difference for someone.” Barbara exhibits extraordinary dedication to her role as a CASA.

Barbara takes time to participate in most of her children’s interests such as attending school performances, graduations and award ceremonies. Barbara actively serves our community by collecting clothes and other items for those in need, including prom and graduation attire for our children in care. She serves as a model example of proper advocacy for our volunteers.

Also, recipient of an important award was volunteer Bernard Marker who received the Shining Star award for his outstanding service as a new volunteer. During his one year tenure he has already represented 8 children. One family represented included 5 children who were not all placed together. He faithfully visited each child monthly and once reunification was imminent, he worked closely with the parents to assure the safety and well- being of the children.

Over sixty CASA volunteers were recognizing during the event’s proceedings. A special recognition was presented to Joe Justice for his dedication while working for the Juvenile Court as Special Assistant Attorney General and to Christie Burke who is a case worker at the Department of Family and Children Services for her excellent collaboration with CASA volunteers.